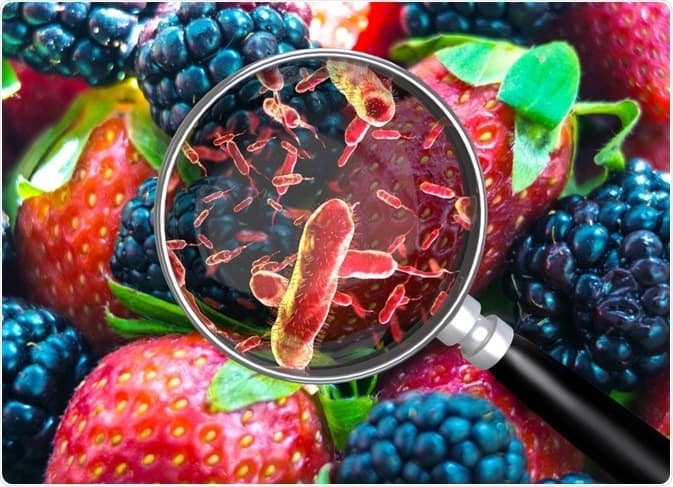 The 4 different types of contamination

In this article, we’re looking at types of contamination.

As we have already briefly observed in the previous article, foreign objects are physical contaminants that should not be found in food. Although many are not dangerous to the customer, they are considered highly unwelcome and distasteful.

Physical contamination is one of the most frequent causes for customer complaints, which is why it is vital to avoid such contamination.

Chemical contamination is the presence of unwanted substances that make food unfit for consumption or use. Chemicals may find their way into food through a variety of processes such as cleaning products not used and rinsed correctly, mercury from the sea getting into fish, pesticides using pest control and toxic lubricants used in food preparation machinery.

Acute poisoning is known as accidental poisoning and chronic exposure poisoning occurs slowly over a prolonged period of time.

Open tin or iron metal cans should not be placed in the fridge, particularly acidic foods like tomatoes and citrus fruits. As it can allow the metal to oxidize and enter the food.

Pesticides and lubricants can be toxic and must be handled with extreme care following manufacturer’s instructions.

An allergy is a reaction the body has to a particular food or substance. Allergies are extremely common. They’re thought to affect more than one in four people in the UK at some point in their lives.

Most allergic reactions are mild, but occasionally a severe reaction called anaphylaxis or anaphylactic shock can occur. This is a medical emergency, its needs urgent treatment. Allergic reactions generally happen quickly within a few minutes of exposure to an allergen.

The symptoms of anaphylaxis may include feeling lightheaded or faint, breathing difficulties, anxiety, clammy skin, fast heartbeat, collapsing, or losing consciousness. If you believe someone is suffering from an allergic reaction, you must contact 999 or 112 immediately for urgent assistance.

By law, all food establishments and manufacturers must provide clear information regarding the 14 major food allergens on prepacked and loose food.

We will look at those allergens shortly. The majority of food allergy sufferers will know what foods they have to avoid. However, these are not always obvious on the labels and even a minuscule amount of an allergen could cause an immediate reaction which could kill them.

The law changed in December 2014 to state that all food labels must highlight using bold or italic text allergen information. It must be included within the ingredients listing and not elsewhere on the packaging. As you can see from the example from a tin of soup, the label clearly identifies the possible allergens in the ingredients.

All food establishments, whether they are takeaway or eat-in must either provide allergen information on a menu or display board to inform customers where they can find the information.

If a person requires food allergens information, they need to speak to a member of staff for their allergen file before placing their order. Businesses are liable for prosecution if they fail to identify allergens in their food and or claim they were unaware. There are 14 major allergens which need to be identified on all food packaging and loose food.

Celery may be found in soups, salads and stock cubes.

Eggs are used partially or wholly in cakes, quiches, pastries, mayonnaise, pasta, and food products glazed with egg. Fish is used partially or completely in dressings, stock cubes, fish sauce, and relishes. Lupin seeds and flour can be found in some pastries, bread, pasta, pancakes, and waffles.

Microbial contamination is the inclusion or growth of harmful microorganisms in an item used in food, making it fit for consumption. It is the most common form of contamination. Contaminated food may not smell, taste, or look any different to food that is not contaminated. However, spoilage bacteria can cause food to go off by changing the flavor, smell, taste, color, and texture. Viruses can enter our bodies through contaminated food or water and can multiply inside causing various illnesses to the person. Unlike bacteria, it does not require food or moisture to survive. Our bodies are the correct environment for multiplication, which means that the person does not have to ingest high quantities for an illness to occur as the damage has already been done from the first instance.

Other potential sources of contamination include food handlers keeping poor personal hygiene routines, raw vegetables and shellfish. Molds and yeast can contaminate and grow on a wide variety of food. Whilst the majority of molds are harmless, some can produce harmful poisons that make food unfit to be eaten. Many of us will have observed mold growing on food, changing the appearance, and often the smell of the food. There are naturally poisonous foods, such as green potatoes, raw red kidney beans and rhubarb leaves and other pulses that can cause illness. Majority of these happen within the home rather than in a food establishment, due to strict guidelines.

Remember it is a criminal offense to sell food that is unfit for human consumption. Bacteria is found everywhere, pests, dirt, dust, war, food, contaminated water, and on human skin. Contamination can be physical, chemical, bacterial, or naturally occurring. Whether it is accidental or deliberate contamination is never acceptable and can often be avoided if good hygiene rules are in place and adhered to every time.